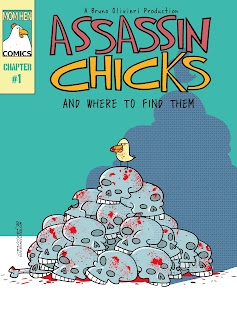 Assassin Chicks is now available in Kindle Format and english edition on Amazon! Let’s face it — chicks aren’t scary. Most of we typically portray our “bird puppies” little as cute, cotton softless balls. Often, they’re , swarming around, and anxious to pecking on crumbs or earth worms.
But this is a invasion and destruction comics. Don’t call it entertainment — call it survival research for when chicks attack and kills everything and everyone! Throngs of flesh-hungry chicks born upon an ordinary farm during a tunder- storm night.
Their goal is to create an army to march on the capitals of the world and futher on the space and the moon. How does will end? We won’t give it away (to be continued...), but enjoy the cool events that follow one another.
Buy it here!
Pubblicato da Bruno Olivieri alle ore 13:27